Weed the people: Man caught smoking pot in Capitol riot has ‘no regrets’ 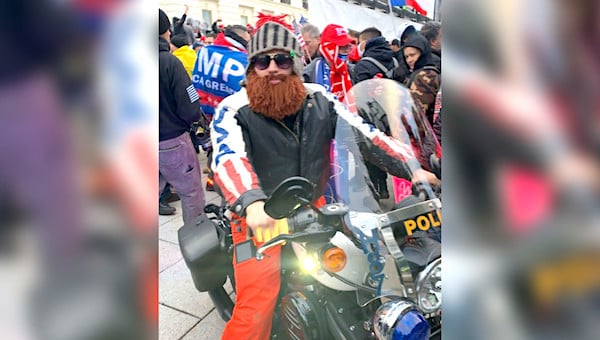 The rioter caught smoking marijuana in the Capitol building during the riot on Jan. 6 said he has “no regrets,” Bloomberg reported Tuesday.

Brandon Fellows, 26, had reportedly never been to a rally for President Donald Trump and was motivated to attend after the president’s tweet claiming that it would “be wild,” Bloomberg reported. He said he was unaware of any plans to enter the Capitol before it happened.

“I have no regrets,” Fellows said, Bloomberg reported. “I didn’t hurt anyone, I didn’t break anything. I did trespass though, I guess.”

Fellows reportedly posted videos to Snapchat of himself smoking a joint with his feet up on a Senator’s desk and bothering police officers, according to Bloomberg.

He said the people participating in the Capitol riot “felt like family,” though he did not think he would get along with them in everyday life, according to Bloomberg. Fellows said he traveled to Washington out of frustration with COVID-19 lockdowns and because he believes that the 2020 Presidential election was rigged.

“We were there for one common cause, which is making a statement that the government is crushing down on us,” Fellows said, Bloomberg reported.

Fellows said he got in line at The Ellipse at 1 a.m. Wednesday morning and was in the fifth row for Trump’s speech, Bloomberg reported.

“This is the last stand,” Fellows said before Trump’s speech, Bloomberg reported. “I feel like I’ve seen a lot of the election fraud evidence, and I don’t understand why nothing is being done.”

Fellows had reportedly never participated in a march and joined in with others headed to the Capitol, according to Bloomberg. “I was like ‘Oh cool, there’s gonna be a march. I’ve never been in a march,'” Fellows said.

He said that the barriers were overturned when he arrived on the Capitol grounds, Bloomberg reported. Fellows climbed a wall to get to the Senate side of the building where he watched rioters beat a door using a cane until they broke through.

Fellows said he was hesitant to enter the building, but after he learned that people weren’t being arrested he climbed through a broken window, Bloomberg reported. He wandered around the Capitol for 30 minutes, smoked a joint, and spoke to law enforcement.

“Did I think I was going to get in trouble?” Fellows said, Bloomberg reported. “Uh, no.”

He said that he plans to return to Washington on Jan. 20, and expects there to be more violence, Bloomberg reported.

Fellows trims trees and repairs chimneys in upstate New York while living in a remodeled school bus, according to Bloomberg. He previously worked at a grocery store.

The post Weed the people: Man caught smoking pot in Capitol riot has 'no regrets' appeared first on WND.