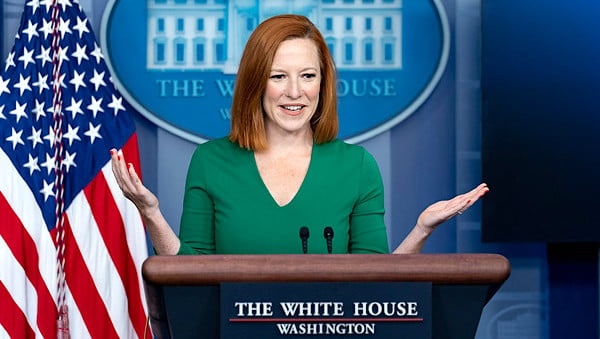 An apparent slip of the tongue on Friday's broadcast of "The View" on ABC has some on the political right voicing that.

The spokeswoman for Biden was discussing recent issues with host Joy Behar, who in the final moments of the program, said: "A little bird told me that you said you might be retiring, resigning the job this year. Say it isn't so. Is it true?"

Psaki laughed, then responded: "I don't know when I'm leaving. This is an honor and a privilege and I love working for President Obam–Biden," slipping in the name of her former boss before correcting herself.

"I love spending time with him, hearing what's on his mind. Going on the road with him is actually the best thing possible. I wish everybody could have that experience, because he gets so much joy out of it. No one likes a rope line more than President Biden."

"Oops," reacted Jenna Ellis, the former senior legal adviser to President Donald Trump, as she was among many who tweeted a video clip of the slip.

“I love working for President Oba—Biden…”

Chris Donaldson at BizPacReview said Psaki caught herself "after possibly letting the cat out of the bag by confirming the suspicions of those who are skeptical that Biden is the one calling the shots."

Ironically, during a White House press briefing in April, Psaki did suggest Biden was receiving policy advice from Obama.

"In terms of his engagement with President Obama, they are not just former colleagues I guess you call them as president and vice president, but they also remain close friends," Psaki said.

"And they talk regularly about a range of issues from policy issues to bouncing ideas off of each other to their families, so they are in close touch but we just don't read out those specific calls. We keep them private."

Is it possible we've all been missing something extraordinary in life? Can we really discover and understand the secret to EVERYTHING? An inspiring new book unlocks hundreds of mysteries from the Bible and your personal life!