Syrian leader wants U.S. to help fend off threat of invasion by Turkey 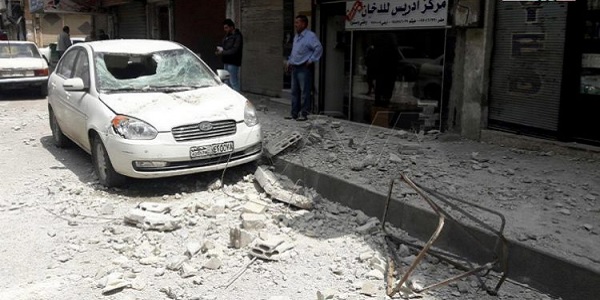 A Syrian Democratic Forces (SDF) leader representing U.S. allies in the fight against the Islamic State implored America in a letter Wednesday to defend Kurdish-controlled northern Syria against an imminent Turkish invasion, according to Politico.

Turkey launched airstrikes on targets in northern Syria on Tuesday against Kurdish-led militias, which it perceives as terrorist threats, Politico reported. Bassam Saker, a representative to the U.S. of the SDF‘s political branch, known as the Syrian Democratic Council (SDC), accused the U.S. of prevaricating on a response in the letter to President Joe Biden, as Turkish President Recep Tayyip Erdogan has threatened to launch a ground invasion in the coming days.

“Now, the United States has stepped aside and allowed these attacks to occur, violating years of partnership,” Saker wrote, according to Politico.

“The United States should never treat its alliances so carelessly. Where is the condemnation of the United Nations and the international community? Right now, we hear only silence,” Saker said.

U.S.-trained SDF fighters died in the recent airstrikes, the letter noted, according to Politico.

Turkey targeted a jointly-operated U.S. and SDF military base, Sinam Mohammed, another SDC representative to the U.S., said.

“We have received additional information that there was a risk to US troops and personnel,” Centcom told AFP.

Erdogan promised to “root out” the Kurdish “terrorists” he blames for a Nov. 13 bombing in Istanbul that killed six and wounded more than 80, Politico reported. Both the SDF and its Iraqi affiliate, the PKK, have denied involvement.

Simultaneously, #Kobani & many safe areas in #NES are being hit by airstrikes
Among the safe Pop.there is great fear of human casualties &a repeat of large-scale displacement the region has experienced. #Asayish &concerned teams continue their mission to support the pop.@CJTFOIR pic.twitter.com/9Ld9Rjz3Jn

Erdogan said Tuesday his response would include tanks and soldiers, according to Reuters. A SDF officer told Politico an invasion could come as early as this week and would likely be focused on two cities not occupied by U.S. troops.

The U.S. warned Turkey against launching an invasion into northern Syria, as doing so would damage a critical and long-standing U.S. partnership in the fight against Islamic State terrorists, Politico reported.

It could also complicate U.S. posture in Europe, where it needs cooperation from Turkey, a member of the North Atlantic Treaty Organization (NATO) in the alliance’s response to the Russian invasion of Ukraine.

“What is happening in northern Syria cannot be controlled unless the US intervenes and a firm international stance is taken on #Turkey’s actions in the region,” the SDC told North Press Agency, a Syrian news outlet, on Sunday.

The National Security Council did not immediately respond to the Daily Caller News Foundation’s requests for comment.

The post Syrian leader wants U.S. to help fend off threat of invasion by Turkey appeared first on WND.