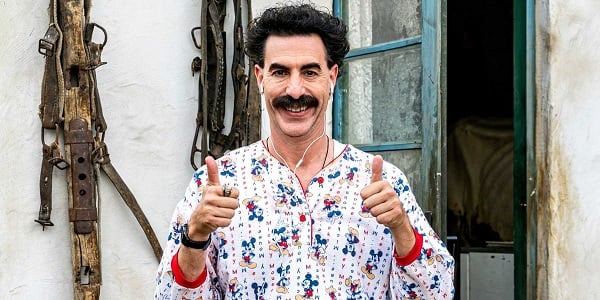 The actor who pranked Moore and portrayed him as a pedophile on television earlier was ordered to answer questions about his actions from Moore's lawyer in a $95 million defamation case.

As part of the process, there was a provision for some materials to be labeled as "confidential," and lawyers for Cohen now have applied that description to the entire video of Cohen's deposition.

The reason cited was that the deposition happened in an "undisclosed location."

However, explained lawyer Larry Klayman, representing Moore, "Nowhere in the video or the transcript of the deposition is any mention made of its location, nor is the location identifiable."

He argued the video shows that Cohen was "looking downward – most likely at his phone or tablet," and it appears that he was being "fed answers."

Judge John P. Cronan was asked to evaluate the video himself to decide what was happening.

The lawyer's letter to the judge noted the case is fairly straightforward and not an antitrust, tax or securities case that could involve a variety of levels of confidentiality.

The letter requested an order unsealing the video of Cohen, a "public figure, and a Hollywood star."

Cohen tricked Moore into a prank interview several years ago in which he held a purported "pedophile-detection" wand, which he said would beep in the presence of a pedophile.

Moore is seeking $95 million in damages from Cohen and Showtime for the stunt, which was aired on Cohen's "Who Is America?"

Cohen falsely portrayed himself as a representative of the since-dissolved company Yerushalayim TV and has claimed that Moore's consent agreement with the company provides immunity.

However, Klayman has argued that a longstanding contract principle is that "a misrepresentation of material facts" can be used to cancel a contract and that Cohen misrepresented himself, his intent and his plans.

"Whether couched as opinion, humor, or rhetorical hyperbole, which defendants attempt, defamatory statements made by a comedian are actionable where a reasonable listener or viewer could conclude that he or she was asserting or implying false facts about a plaintiff," the arguments on behalf of Moore explained.

Whether or not the statements are defamatory is for a jury to decide, the case argues.

Moore, who twice was elected to the top judicial post in Alabama, was accused by nine women during his 2017 U.S. Senate run of sexual misconduct when the women were teenagers and he was in his early 30s. Moore has vehemently denied the claims.

Cohen claimed in advance of the interview Moore was to receive an award for supporting Israel.

Moore's claim, joined by his wife, Kayla, alleged the actor created "severe emotional distress" for both.