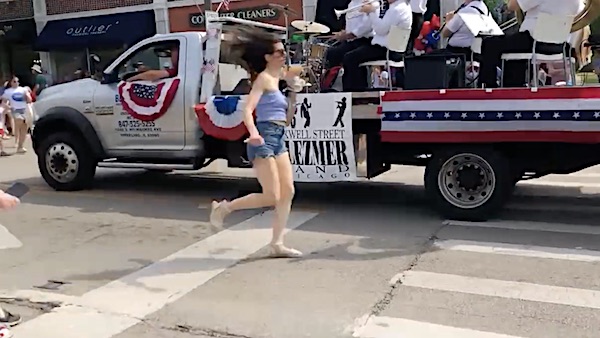 A woman in Highland Park, Illinois, flees as gunshots ring out during an Independence Day parade on July 4, 2022. (Video screenshot)

(VALIANT NEWS) -- A Fourth of July parade in Highland Park, Illinois, was thrown into chaos on Monday morning after multiple people were shot, with at least six fatalities.

The Independence Day parade was taking place in Highland Park, a city in Illinois about 25 miles north of downtown Chicago. Videos from the scene showed people fleeing as shots rang out at around 10:10 local time, reportedly from a shooter stationed somewhere on the rooftop of an Uncle Dan’s outdoor equipment and clothing store, according to witnesses.

During the confusion, a local band on a parade float continued to play, while many attendees abandoned chairs, blankets, and even baby strollers running for cover.