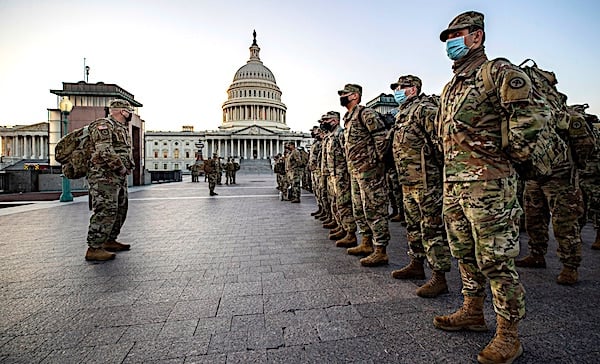 A federal judge has ordered snippets of video from the Jan. 6 Capitol riot made public in a criminal case against one of the hundreds of people who entered the building that day.

Democrats and legacy media outlets continually have demanded that the event was an "insurrection" – and they even tried, and failed, at a second impeach-and-remove campaign against President Trump on that claim.

The federal government repeatedly has demanded that the video from the many surveillance cameras in the building remain secret.

But U.S. District Judge Beryl Howell sided with media groups that wanted the videos made public.

BuzzFeed News, which is part of that coalition, posted the segments, totaling about 15 minutes, online, and noted, "They show rioters streaming through open doors and broken windows at an entrance on the Senate side; crowds of people walking into the Crypt, standing in a large crowd, and eventually dispersing; and, finally, rioters exiting as U.S. Capitol Police officers in riot gear gather at the Senate entrance point to stand guard as a mob that’s outside looks in through the broken windows. There is no audio."

The controversy is that President Biden and his Democrat Party colleagues have described the events as worse than anything before in America's history, literally an attempt to overthrow the government. Biden compared it to the Civil War, which left hundreds of thousands dead.

A commentary at Redstate.com pointed out the fallacy in that line of thought.

The commentary explained, "If you can’t watch the video, what you’ll see are open doors/windows and people casually walking in. There’s no mad rush, no violence, no weapons, and certainly no organized insurrection. Instead, people mingle, take selfies, and snap pictures of the surrounding architecture. Yes, it’s trespassing and that’s illegal, but what’s on that video is a far cry from the vast threat we’ve been assured was present that day."

The commentary explains the events of the day were caused by "short-sighted idiots who perpetrated it did real damage to Trump and his movement. Yet, I also like to live in reality, and what these videos show is not a nation-shaking insurrection organized by some higher authority. Rather, it shows individuals who made a stupid choice."

The government had claimed the videos could assist "bad actors" in planning some future event there.

The specific videos released were from several points in the building and cover about 15 minutes. They were used by prosecutors in a case against Eric Torrens of Tennessee, who pleaded guilty to a misdemeanor of illegally parading in the Capitol.

The judge rejected prosecutors' demands for secrecy after they claimed, "This footage, when combined with other footage from nearby cameras, could be used to track individual rioters moving through the building thereby creating a visual pathway which other bad actors could use in planning their breach point and pathway for future attacks."

The judge found that anyone taking a public tour could see the areas captured in the videos.

On that day, President Trump held a morning rally, with tens of thousands of people. After that, thousands went to the Capitol, where Congress was scheduled to vote on the outcome of the 2020 presidential race.

Many hundreds walked into the building, often with the Capitol Police holding the doors open for them. They took selfies. But handsful of those eventually turned violent, and they broke windows and doors and vandalized parts of the facility.

Hundreds have since been arrested and mostly are facing trespassing charges and the like.

The government has some 14,000 hours of video that would reveal to the public exactly what happened that day.

The organization reported, "This case concerns whether the public has a right of access to records about what Speaker of the U.S. House of Representatives Nancy Pelosi has described as 'one of the darkest days in our nation's history,' 'an attack on our very democracy[,]' and 'an attack on the peaceful transfer of power.' Speaker Pelosi also has stated, 'It is imperative that we find the truth of that day and ensure that such an assault on our Capitol and Democracy cannot ever again happen.'"

The trigger for the event was the suspect results of the 2020 presidential race. Joe Biden won by only a few thousand votes spread across multiple swing states. But the circumstances raised enough concerns that lawsuits were filed, and when they were unsuccessful, audits, which still are ongoing, proposed.

What isn't in dispute is the fact that state and local officials arbitrarily changed voting laws in order to accommodate fraud-prone mail-in ballots, even though the Constitution allows only state lawmakers to do that. Wisconsin recently started an investigation into that very issue.

Further, there were outside influences evident, since the leftist Mark Zuckerberg of Facebook megawealth handed out cash prizes totaling about $350 million to local elections officials, mostly liberal, so they could run their operations.