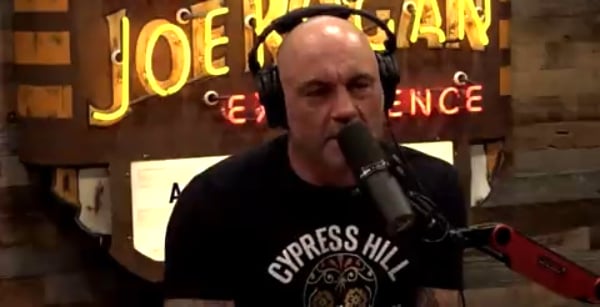 No. 1 podcaster Joe Rogan explained on Wednesday to CNN health correspondent Dr. Sanjay Gupta why many parents believe vaccinating their children for COVID-19 poses a greater risk than the disease itself.

"Don't you think that, even with a breakthrough infection, untreated, you are probably more vulnerable than the average child who is not vaccinated, who gets COVID?" Rogan asked Gupta on "The Joe Rogan Experience."

Before allowing Gupta to answer, Rogan noted that people who have been double vaccinated have died, including an actor who recently won an Emmy Award.

"The odds of that happening to a healthy child are very, very low," Rogan said.

Noting Gupta, age 51, was about the same age as the actor, Rogan said, "You, vaccinated, would be more vulnerable of a breakthrough infection than a young child would be, statistically speaking, right?"

Gupta said both are rare.

"But you're not worried about catching it," Rogan continued, "because you've been vaccinated and you think it imparts a certain amount of protection. "What I'm saying to you is that I think that 'not worry' is the same feeling that a lot of people have about their children.

Rogan gave Gupta little room to answer, but the CNN health expert agreed that very few children, about 500 out of millions who have been exposed, have died of COVID.

Gupta said that "part of it is not defining this in terms of life and death."

Rogan interrupted: "But do you understand my point?"

Gupta replied, "Well, are suggesting that I get [a booster shot]?"

"I'm not saying that," Rogan said. "What I'm saying is your attitude about not being concerned -- because you have antibodies, and you think you would get through it even if you had a breakthrough infection -- that is the exact same attitude that a lot of young people have, where they don't want to get a shot, because they are worried about the consequences."

Rogan acknowledged that the number of reported deaths of young people from the vaccines is "incredibly small," but they are documented on the CDC's Vaccine Adverse Event Reporting database.

Rogan asked Gupta about the evidence that the pandemic began with the novel coronavirus escaping from the Wuhan Institute of Virology.

"I don't know, sometimes, what to do with this. It's highly suspicious," Gupta said.

Gupta noted the U.S.-based researcher funded by Dr. Anthony Fauci's agency for his work at the Wuhan lab, Peter Daszak, published a letter in The Lancet in February 2020 dismissing the lab-leak theory as "conspiracy."

The CNN health expert said he spoke with Daszak about the issue, saying, "Peter, this is not making sense."

Daszak, the founder of EcoHealth Alliance, replied that there's no evidence that the virus ever existed in the Wuhan lab.

Rogan said that's because the Chinese deleted all the evidence.

"I don't know, Joe, what to make of it," Gupta said. "There's clearly, as you said earlier, where there's smoke, there's fire. But can I say conclusively? No. And part of me thinks we may never know."

Rogan asked Gupta about Fauci denying to Sen. Rand Paul, R-Ky., in Senate hearings that he was funding gain of function research, which makes viruses transmissible between humans and more dangerous.

The answer was that there is "nuance" to the definition of the research. And the strict definition, Gupta said, is that "you've gotta know that it will lead to gain of function."

But Gupta agreed that, in simple terms, the research funded by NIH was leading to virues that "could" be more contagious and virulent.

"That's what a lot of people are concerned about here," he said.

See the segment about the lab-leak theory: