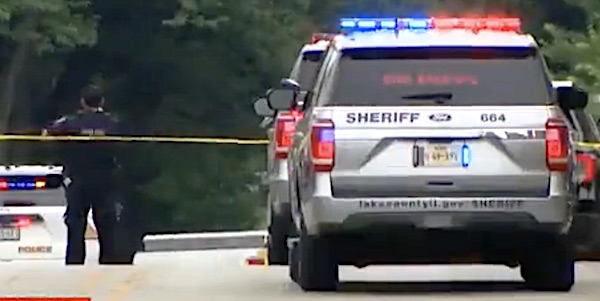 Police on scene of a mass shooting at a parade in Highland Park, Illinois, on July 4, 2022. (Video screenshot)

It took just a few hours for Democrats to call for gun control Monday in the wake of a mass shooting during a July 4 parade in Highland Park, Illinois.

A shooter fired at the holiday parade from a rooftop, killing six people and wounding at least two dozen Monday morning. Democrats called for new gun control measures within hours of the shooting.

“Congress needs to take action, whether it’s universal background — things that 90 percent of the country support, universal background checks, making trafficking of guns across state lines illegal, straightforward things we can do that can respect the Second Amendment, but also keep our kids, our schools, our theaters, our communities safer,” Democratic Rep. Brad Schneider of Illinois told CNN host Victor Blackwell around 1:24 p.m. Central Time Monday. The attack took place at about 10:14 a.m. CDT, according to NBC Chicago.

“We have to get rid of assault weapons, high-capacity magazines, and so many other common-sense reforms that wide majorities of Americans are crying out for,” Democratic Sen. Tammy Duckworth of Illinois said at 5:46 PM Central.

Democratic Gov. J.B. Pritzker of Illinois also called for more gun control in the aftermath of the shooting.

“There are going to be people who say that today is not the day, that now is not the time to talk about guns,” Pritzker said. “I’m telling you there is no better day and no better time than right here and right now.”

Other Democrats took to social media to demand gun control in the hours after the shooting.

The Supreme Court sent multiple cases involving semiautomatic firearms and “high-capacity” magazines back to lower courts for review Thursday after issuing a 6-3 ruling in New York State Rifle and Pistol Association that struck down New York’s requirement that applicants show “good cause” to obtain a concealed carry permit, The Associated Press reported.

Schneider, Duckworth, Pritzker, Jones, Swalwell and Pascrell did not immediately respond to requests for comment from the Daily Caller News Foundation.

The post It took just hours for Dems to demand more gun control after July 4 shooting appeared first on WND.