Half of small-business owners fear they won’t survive 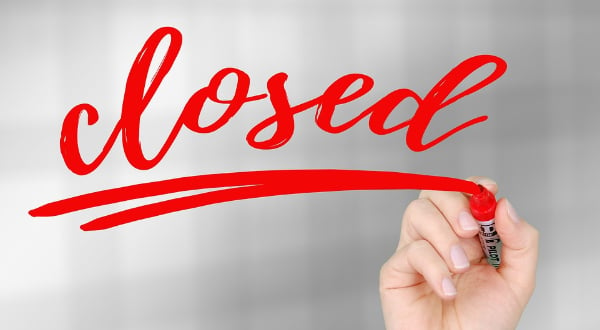 Nearly half of small-business owners across the nation are at risk of closing by year's end due to the lockdowns implemented in response to the coronavirus pandemic, according to a survey.

About 48% of the owners say they are generating revenues below what they need to stay in business, according to Alignable's Small Business Funding Needs report, Fox Business reported.

The report surveyed 6,300 U.S. business owners during the first week of December.

"It's been nine long, frustrating months for small business owners as they’ve worked tirelessly to save their businesses, livelihoods, and the jobs of everyone they employ," said Alignable CEO Eric Groves in the report.

Groves said the Paycheck Protection Program passed by Congress was only a short-term fix. His organization reported 87% of small-business owners say they need additional funds to survive.

Many business owners question "the science" upon which politicians say they rely.

A reporter for the Los Angeles Fox TV affiliate who asked L.A. County Supervisor Sheila Kuehl to provide the evidence behind shutting down outdoor dining in Los Angeles was met with sarcasm.

Kuehl's office said it was "so glad FOX 11 is interested in science," according to Bill Melugin. The reporter received 12 studies but none had anything to do with outdoor dining.

Melugin said he followed up and asked which studies Kuehl used in her decisionmaking.

"They were unable to answer that question," he said.

Yesterday, I reached out to @SheilaKuehl's office to request the "six studies" she claimed to have highlighting outdoor dining risk. They told me they're "so glad FOX 11 is interested in science" & provided me these 12 studies. None of them analyze outdoor dining. @FOXLA https://t.co/kLNo47pwac pic.twitter.com/pJhFdnGxKK

And business owners can't be faulted for suspecting the politicians who have closed their businesses don't believe what they say.

The Fox affiliate discovered Kuehl was found dining at a Santa Monica Italian restaurant hours after she voted to move ahead with the ban on outdoor restaurant dining.

But she's one of many across the nation who have been credibly accused of hypocrisy. Among them are Kuehl's governor, Gavin Newsom, who famously was spotted dining indoors with a large group at one of the state's most expensive restaurants.

The toll on business owners was expressed in an emotional video posted on social media by the owner of an L.A. eatery, Angela Marsden. She was overcome by tears as she showed a catering company just 90 feet from her outdoor dining area that was set up one day after L.A. forced her to close her business.

Even Joe Biden's coronavirus adviser was once against lockdowns, warning in a March 21 op-ed for the Washington Post of the high economic and social costs of "the near-draconian lockdowns" in effect at the time in China and Italy, which ultimately don't reduce the number of cases, only stretching them out over time.

Michael T. Osterholm, a professor and director of the Center for Infectious Disease Research and Policy at the University of Minnesota, advocated the strategy now promoted by epidemiologists at Stanford and Oxford advising Florida Gov. Ron DeSantis: With a 99% survival rate for most, according to the Centers for Disease Control, let the healthy go about their business while protecting the vulnerable, the people over 70 with multiple life-threatening diseases.

Osterholm wrote in his Washington Post piece that "the best alternative will probably entail letting those at low risk for serious disease continue to work, keep business and manufacturing operating, and 'run' society, while at the same time advising higher-risk individuals to protect themselves through physical distancing and ramping up our health-care capacity as aggressively as possible."

"With this battle plan, we could gradually build up immunity without destroying the financial structure on which our lives are based," he said.

In November, however, Osterholm advocating a national lockdown of four to six weeks.

Those who died of coronavirus, according to the CDC, had an average of 2.6 comorbidities, meaning more than two chronic diseases along with COVID-19. Overall, the CDC says, just 6% of the people counted as COVID-19 deaths died of COVID-19 alone.

In a July podcast that resurfaced this week, White House coronavirus adviser Dr. Anthony Fauci admitted the widely used PCR tests pick up harmless fragments of the coronarvirus, resulting in many false-positive cases that result in overstating the threat. In August, the New York Times examined PCR testing data in three states and found "up to 90 percent of people testing positive carried barely any virus."

A briefing published by four British scientists concluded PCR testing is "distorting policy and creating the illusion that we are in a serious pandemic when in fact we are not."

The paper noted that legal cases and technical challenges to PCR mass-testing are growing across Europe, including in the U.K.

"A false positive pseudo-epidemic is a well described phenomenon in the medical literature which results in an exponential rise in diagnosed cases and deaths but no excess deaths," the British researchers write.

WND reported Monday a study published by the peer-reviewed journal Nature found no transmission of the coronavirus among people in close contact with asymptomatic patients.

The post Half of small-business owners fear they won't survive appeared first on WND.