Conference tells men not to use urinals in restroom! 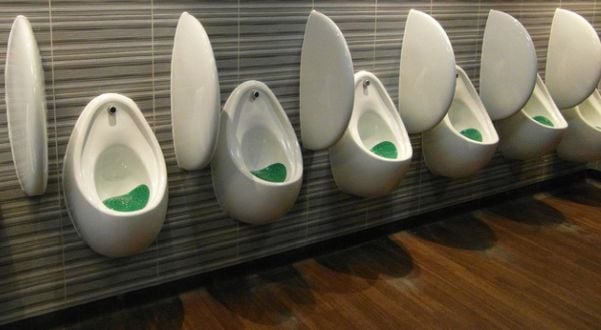 Those activists across America who pledge loyalty to the transgender ideology already have demanded, many times successfully, that others submit to their agenda and use pronouns that obviously are wrong, such as "he/him" for a female.

It's because that female thinks she's male.

Now that level of fantasy is being expanded, with conference organizers requesting that men not use urinals at a meeting of the American Political Science Association.

There officials posted a sign promoting the transgender beliefs. It stated, "All gender restroom. This restroom contains stalls and urinals. Out of respect for all attendees, we ask that the urinals not be used."

The message also was posted in a second language.

The New American pointed out that "trans" radicals now "want to control your bathroom habits," not just your pronouns.

"It’s not enough for 'transgender' activists to control how you speak with their pronoun prescriptions (e.g., ze, zir, zem). Now ze want to control your bathroom habits, too. Seriously."

The report said the issue was that "Transmen," "meaning, women masquerading as men, may be triggered, offended, or disturbed because they can't perform the nature call in question standing up."

As Twitchy confirmed, "Way back in 2017, we had a glimpse into where things were headed when we saw the restroom signs at Hampshire College that read, 'Restroom With Urinals' and 'Restroom Without Urinals.' Flash forward to 2022, and schools were installing tampon dispensers in boys’ rooms to comply with the Menstrual Dignity Act."

I am not at APSA, but I saw this via text and question the idea that asking people not to use urinals is in fact an act of respect for all attendees. pic.twitter.com/OOojmEeKzI

The report added, "Believe it or not, though, this isn’t the first attack on men’s nature-call nature. In fact, feminists in Sweden, Germany and Australia did this decades ago, also taking the 'aggressive stance' position. As the late Professor Walter Williams reported in 2000, these activists 'want men to sit down while urinating.' The main gripe: 'men standing up to urinate is deemed by these women as triumphing in their masculinity,' 'a nasty macho gesture' and by extension degrading to women.'"

The post Conference tells men not to use urinals in restroom! appeared first on WND.