Pope Francis in the popemobile (Pixabay)

"The Holy See has deliberately renounced the supernatural mission of the Church, making itself the servant of the New World Order and Masonic globalism in an antichristic counter-magisterium," he wrote in a column for LifeSiteNews.

Only two Catholic clergy are among the 114 speakers scheduled for the fifth International Vatican Conference, May 6-8. 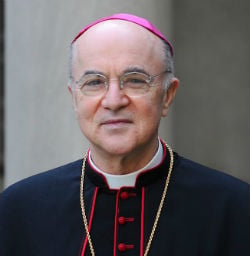 Titled "Exploring the Mind, Body & Soul. Unite to Prevent & Unite to Cure. A Global Health Care Initiative: How Innovation and Novel Delivery Systems Improve Human Health," it is hosted by the Pontifical Council for Culture, the Cura Foundation, the Science and Faith Foundation and Stem for Life.

Vigano said Fauci's "scandalous conflicts of interest did not prevent him from taking over the management of the pandemic in the United States. Chelsea Clinton, he noted, is a "staunch abortion advocate."

Others speakers are New Age guru Deepak Chopra, the CEOs of Pfizer and Moderna, representatives of Big Tech and, wrote Vigano, "a whole slew of abortionists, Malthusians, and globalists known to the general public."

"The conference has recruited five prominent journalists to be moderators, who are exclusively from left-wing media outlets such as CNN, MSNBC, CBS and Forbes," he wrote.

In January, Viganò declared in an interview that practicing Catholic Joe Biden's ties to China and his globalist policies would make him an "irreparable disaster" as president. Last October, Vigano wrote an open letter to President Trump warning the president is "the final garrison" against the "Great Reset," a plan by the World Economic Forum to use the coronavirus pandemic to advance globalism.

The archbishop said the May event is "the umpteenth scandalous confirmation of a disturbing departure" of the Vatican "from Catholic orthodoxy."

"The Holy See has deliberately renounced the supernatural mission of the Church, making itself the servant of the New World Order and Masonic globalism in an antichristic counter-magisterium," he said.

The archbishop referred to the hierarchy that made Jorge Mario Bergoglio the pope as the "deep church."

"The fact that the deep church has managed to elect its own member so as to carry out this infernal plan in agreement with the deep state is no longer a mere suspicion, but a phenomenon which it is now essential to ask questions about and shed light on," Vigano said.

He noted the speakers support a "globalist ideology" that backs abortion, the use of fetal material in research, demographic decline, the LGBT agenda and the "narrative of Covid and the so-called vaccines."

He pointed out that among the organizers of the event is the Stem for Life Foundation, which describes itself as "a nonsectarian, nonpartisan, tax-exempt organization focused on creating a movement to accelerate development of cell therapies."

The image used to promote the event is significant, the archbishop said, a "close-up of Michelangelo’s fresco of Creation on the Sistine Chapel ceiling, in which the hand of God the Father reaches out towards the hand of Adam, but with both hands covered by disposable surgical gloves, recalling the regulations of the new 'health liturgy' and implying that even the Lord Himself might spread the virus."

"In this sacrilegious representation, the order of Creation is subverted into therapeutic anti-creation, in which man saves himself and becomes the mad author of his own health 'redemption,'" Vigano said.

The conference, he contined, "will obviously take great care not to mention even indirectly the perennial teaching of the Magisterium on moral and doctrinal questions of the greatest importance."