Biden’s approval ‘sinking like the Titanic,’ now down to 36% 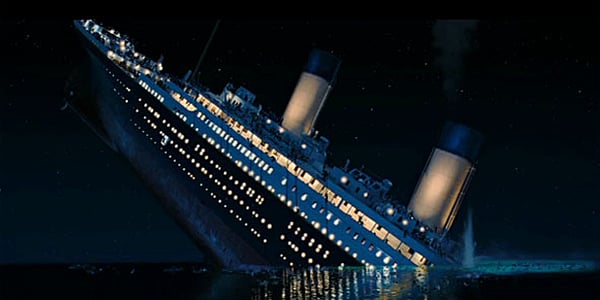 There are a number of ways to describe a precipitous decline, such as Joe Biden's approval rating now down to 36% in a new poll.

The analysts at Zogby Analytics chose to describe it as "sinking like the Titanic," after they crunched their numbers and found only 15% of respondents calling Biden's job performance excellent, and another 21% good.

In contrast, 42% said his work was poor and another 19% said only fair.

"Voters can't help but wonder why the Biden administration keeps sweeping these issues under the rug and declaring them 'transitory,'" the analysis said, citing the U.S. economy, which "teeters on recession," the Wall Street bubble, higher gas and food prices, and "don't forget the U.S./Mexico border crisis, potential U.S. debt default and a once in a generation pandemic."

"Democratic leaders cannot even come to consensus within their own ranks. Without the passage of the 'Build Back Better Act,' or a solid infrastructure bill, and the potential default of the U.S. debt on the horizon, is it any surprise Biden's presidency is sinking like the Titanic? Biden's failure to reach vaccination goals and his executive vaccine mandates have also not helped his cause."

Otherwise, "he is getting hammered," the report said.

Something must give soon," the poll explained. "He needs to get his agenda going, get the debt ceiling raised, and get COVID under control. Each one of these is nearly impossible by itself. Biden ran on the idea he could fix things and heal the country. With each precious day slipping by it seems unlikely he will get his agenda passed or heal the country. Another Trump presidency might not be so farfetched an idea as it was a year earlier."

"Everybody is feeling the pinch at the pump and grocery store. Gas and food prices are skyrocketing, and inflation could help deliver the House back to Republicans!

"It's quite amazing he cannot even get his own party on the same page. Usually, presidents are struggling to pass their agenda with a little bi-partisan support. The Democratic party is more divided than the Republicans now!"

Commentator Paul Bedard at the Washington Examiner pointed out, "President Joe Biden’s crashing polling numbers appear to have no end as he fumbles with the border crisis, a 13-year high in inflation, and the threat of empty toy shelves on Christmas Eve."

He pointed out other polls have shown similarly low approval ratings. "Worse, some polls show that Biden would lose to former President Donald Trump in a new election and that even Biden voters have 'remorse' over their 2020 choice," he said.

It was Politico that reported only days ago that in a focus group, "Pennsylvania Democrats one after another articulated the issue vexing top White House aides, party operatives in Virginia and voters in Georgia: Why isn’t President Joe Biden’s diminished job rating rebounding?"

"And their answers circled back to a similar point: The pandemic and the many ways it continues to hinder normal life is souring their views of Biden," it explained.

"There is a malaise," warned Sarah Longwell, a moderate Republican strategist who became a vocal supporter of Biden in 2020 and led the focus group of Democratic voters, the report said. "People don’t feel like their lives have been improved. They did sort of feel that promises aren’t being kept."

The report noted Biden's approval always has been low among Republicans, but now those numbers for Democrats are dropping – and among independents they are plunging.

Even White House spokeswoman Jen Psaki has admitted that Biden's numbers are being impacted, and she blamed COVID-19.

"This is a really tough time in our country. We’re still battling Covid and a lot of people thought we’d be through it, including us," she said.

The report said Biden's "foundering" is causing concern among Democrats across the country, "especially in Virginia, where a governor’s race next month presents one of the party’s first major political tests since Biden took office."

The report said the Afghanistan disaster, the border and more continue to contribute to the "slide."

Fox News noted that the results already are starting to appear.

Jon Dunwell, 55, a pastor and financial services representative – and a Republican – won a special election in Iowa for a seat that had been held by Democrats for decades.

"Iowans are sending a clear message—they wholly reject the policies and agenda of Iowa Democrats," Jeff Kauffmann, the head of the state’s Republican Party, said.

Bloomberg reported Virginia gubernatorial candidate Terry McAuliffe, a Democrat, even has characterized Biden as a liability in his race.

"We are facing a lot of headwinds from Washington," McAuliffe said recently. "As you know, the president is unpopular today, unfortunately, here in Virginia, so we’ve got to plow through."