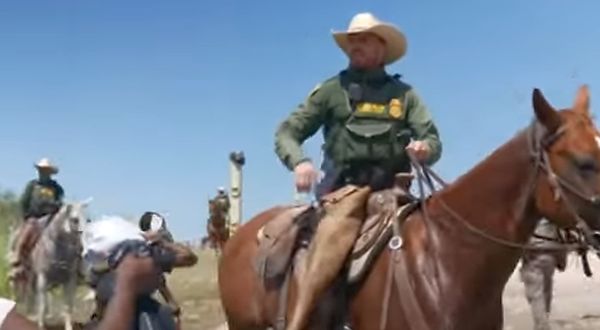 Responding to a reporter Friday asking if he had failed in his promise to end President Trump's "assault on the dignity of immigrant communities," an indignant President Biden accused Border Patrol agents on horseback of "running over" and "strapping" Haitian illegal immigrants, declaring "those people will pay."

Biden was reacting to the outrage that began on social media earlier this week when a photograph of an agent on horseback, with reins flying, trying to subdue a Haitian man prompted accusations of "whipping" illegal immigrants.

But the journalist who snapped the photograph said the image was wrongly interpreted, and he saw no whipping or other abuse. Further, video taken at the time of the photograph that was posted on Twitter Friday morning confirms that.

But Biden declared Friday there will be "consequences" for the agents, who since then have been ordered to no longer carry out their duty to protect the border using horses, which are able to navigate terrain that is largely inaccesible to motor vehicles.

"It was horrible what you saw," Biden said Friday at the White House. "To see people treated like they did? Horses running them over? People being strapped? It's outrageous. I promise you, those people will pay."

The president added that "an investigation is underway, and there will be consequences."

Biden on the lie that border patrol were using whips on illegal immigrants at the border:

"To see people treated like they did? Horses running them over? People being strapped? It's outrageous. I promise you, those people will pay." pic.twitter.com/Jx79KoYTy9

Biden was responding to a reporter who asked him if he was failing to live up to his promise during his campaign to "restore the moral standing" of the U.S. and "immediately end Trump's assault on the dignity of immigrant communities."

The video providing context to images that prompted the outrage was taken by Associated Press reporter Sarah Black Morgan, who was wading in the river at the time.

Sorting through my footage from the border. I was in the river during the viral incident between a Haitian migrant and mounted CBP agent. It's shaky - but here's what I captured. pic.twitter.com/fnvxSU83tO

See the image by photojournalist Paul Ratje that prompted the controversy:

Haitian migrants appeared to be getting chased off with whip-like devices used by border agents. https://t.co/XiX0FkcQji

The photographer, Paul Ratje, told KTSM-TV in El Paso he and his colleagues never saw Border Patrol agents whipping anyone.

"Some of the Haitian men started running, trying to go around the horses," Ratje said. "I've never seen them whip anyone."

A Border Patrol source told Townhall that agents use their reins primarily "to steer the horse, but agents will also spin them sometimes to deter people from getting too close to the horse."

"If they get too close, the horse can step on them, breaking bones or causing other injuries," the source said.

Asked on Monday about the photograph, Department of Homeland Security Secretary Alejandro Mayorkas Mayorkas and Border Patrol Chief Raul Ortiz told reporters in Del Rio, Texas, that they saw nothing wrong, based on initial viewings of the images and footage. Mayorkas explained that agents use long reins to control their horses.

But the next day, after White House press secretary Jen Psaki called the images "horrific," Mayorkas told CNN he "was horrified" by what he saw.

"I'm going to let the investigation run its course. But the pictures that I observed troubled me profoundly. That defies all of the values that we seek to instill in our people," he told anchor Brianna Keilar.

Mayorkas was asked Friday by Fox News White House correspondent Peter Doocy during a press briefing how his assurance that the investigation would be impartial comported with Biden's contention earlier that the Haitians were "strapped."

The DHS chief said Biden was merely expressing the outrage of the American people.

DOOCY TIME: "You said on Saturday -- or rather, on the 20th -- to control the horse, long reins are used. The person who took these photos of the Border Patrol agents said I've never saw them whip anyone. So, why is [Biden] out there today talking about people being 'strapped?'" pic.twitter.com/PQ2R2NBSn4

Vice President Kamala Harris, in an interview on "The View" Friday, said the Border Patrol officers alleged actions "invoked images of some of the worst moments of our history, where that kind of behavior has been used against the Indigenous people of our country, it has been used against African Americans during times of slavery."

On Thursday, Psaki said at the daily White House briefing that
Mayorkas "conveyed to civil rights leaders earlier this morning that we would no longer be using horses in Del Rio."

PSAKI: Horses will no longer be used in Del Rio, Texas pic.twitter.com/P9XNqcXl7Q

The president of the Border Patrol union's chapter in the Del Rio sector condemned the decision to stop using the horses.

"Suspending them all for even a brief amount of time takes away one of the few remaining units that have been in the field making arrests and rescues on a regular basics," said Jon Anfinsen.

Jon Anfinsen, president of the BP union’s chapter in Del Rio, responds to the horse unit being suspended:

“Suspending them all for even a brief amount of time takes away one of the few remaining units that have been in the field making arrests and rescues on a regular basics.” https://t.co/I7WBnt565e pic.twitter.com/iBW5X7Gqds

The controversy at Del Rio, distracting from the crisis of the flood of 15,000 Haitian illegal immigrants, drew activist Al Sharpton to the border to investigate claims of "racist" acts against black people

But in a speech at the encampment in Del Rio, Sharpton was drowned out by protesters who accused him of exploiting the border crisis, calling him "a disgrace" and "a race-baiter."

"Why are you stoking racism where it doesn't exist?" one shouted.

"Del Rio is not a racist city," another said. "Del Rio is a loving, caring community. We don't want your racism in Texas. Get out of here! Nobody wants to hear your racist nonsense in Del Rio!"

Sharpton dismissed the protesters as "Trump supporters" and "right-wingers" who "can scream all they want."

"We don't want your racism in Texas, get out of here!" Trump supporter heckles Al Sharpton during his press conference outside the Del Rio international Bridge. Sharpton toured the Haitian makeshift camp under the bridge pic.twitter.com/0JGoWc7qyT