(Image by Edward Lich from Pixabay)

A three-judge panel of the Fifth Circuit Court of Appeals has vacated a contempt order by a federal judge that landed True the Vote founder Catherine Engelbrecht and veteran election-fraud investigator Gregg Phillips in jail for more than a week.

The ruling Tuesday came three weeks after U.S. District Judge Kenneth Hoyt ordered Engelbrecht and Phillips jailed without bond in Houston, Texas, for refusing to disclose a confidential source in their probe of evidence that a Michigan-based election software company, Konnech, was storing the personal data of U.S. poll workers on servers in China. Hoyt's order was made in a defamation lawsuit against the two filed in September by Konnech CEO Eugene Yu. However, only weeks after the suit was filed, Yu was arrested and charged by Los Angeles County prosecutors for allegedly storing election worker data on servers in China.

"The Fifth Circuit’s powerful ruling lays bare the excesses of Konnech, their attorneys, and the lower court," True the Vote said in a statement. "The impermissible demands of Konnech, which were rubber stamped by the district court, caused great harm to True the Vote as an organization, as well as Catherine Engelbrecht and Gregg Phillips, who were imprisoned for over a week by Konnech and the court’s actions."

True the Vote – whose investigation of ballot trafficking was featured in the film "2000 Mules" – said the rights of Engelbrecht and Phillips "to openly speak on matters of public interest were impeded under the color of authority."

"But hear them clearly today; the investigation of Konnech and their activities continues across America."

In the Fifth Circuit ruling Tuesday, two of the three judges – Trump appointees Kurt Engelhardt and Andrew Oldham – said the lower court's demand that True the Vote identify its source "makes perfect sense when made by a plaintiff in discovery." 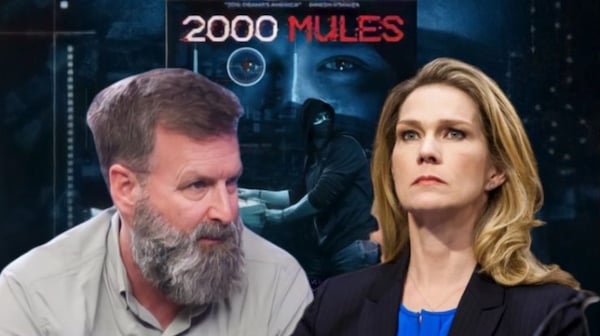 True the Vote's investigation of alleged ballot harvesting in the 2020 election board in featured in the film "2000 Mules" along with board member and investigator Gregg Phillips and founder Catherine Engelbrecht.

Further, the appeals court said Hoyt failed to explain "what sort of emergency could warrant jailing the petitioner-defendants for not making such immediate disclosures."

The third judge, George W. Bush appointee Catharina Haynes, concurred only in the judgment, meaning she did not agree with the court's opinion.

L.A. prosecutors called the case against Yu "probably the largest data breach in United States history." However, shortly after Phillips and Engelbrecht were released, the controversial Soros-financed L.A. district attorney, George Gascón, dropped the felony charges against Yu, saying the office was concerned about both the pace of the investigation and "the potential bias in the presentation and investigation of the evidence."

The D.A.'s office, nevertheless, said it hasn't ruled out refiling the charges after reviewing the evidence and planned to "assemble a new team, with significant cyber security experience to determine whether any criminal activity occurred."

After her release from jail Nov. 7, Engelbrecht said that what is publicly known about Konnech "is just the tip of the iceberg."

She explained in an interview last week with Gateway Pundit founder Jim Hoft that it's her understanding that the charges against Yu were dropped because of California compliance standards that require the trial to take place within a certain amount of time after charges are filed.

"Because there was so much information that was taken in the raid in Michigan (of Konnech's offices), they have not been able to work through all of that and want to make sure that when they do go to trial they are fully prepared," Engelbrecht said.

"So, it is our understanding that the investigation is still moving forward – they are not backing away from any of it, but [the dropping of charges] was really more procedural."

Engelbrecht said the Los Angeles D.A.'s charges against Yu came after the office reached out to True the Vote asking – based on the disclosures in the "2000 Mules" ballot-harvesting probe – if the group had any cellphone location data information from the Los Angeles area.

Engelbrecht said they didn't, but the contact led True the Vote to disclose evidence it had found in the group's investigation of Konnech. The D.A.'s office then launched an investigation of its own.

Phillips told Hoft in an interview that he and Engelbrecht were strip searched, placed in handcuffs and ankle irons, and chained around their waists for most of their first day in custody. He said Engelbrecht was put in solitary confinement for four days in a cinder block cell, with a light always on and a "glass partition" allowing her to be watched while she showered and used the bathroom.