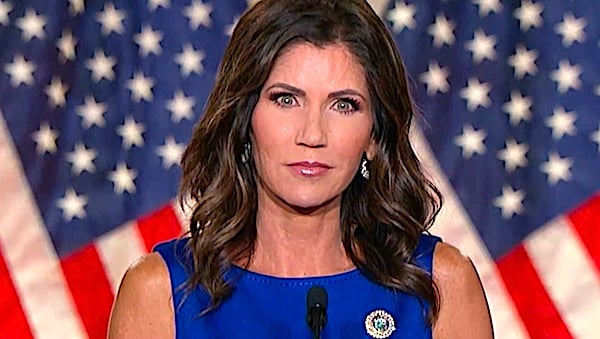 A statement by South Dakota Republican Gov. Kristi Noem telling workers who object to vaccine mandates to simply find a new job is leaving some of her conservative supporters dismayed.

On Saturday, the woman touted by many Republicans as a potential presidential candidate for 2024 and beyond tweeted:

"Workers whose employers are mandating a vaccine for continued employment have the power to say no.

"Our robust economy and job market gives them the option to find a new employer that values personal choice and responsibility, and doesn't force mandates on their employees," she added.

Workers whose employers are mandating a vaccine for continued employment have the power to say no. Our robust economy and job market gives them the option to find a new employer that values personal choice and responsibility, and doesn’t force mandates on their employees.

The statement prompted swift, negative reaction from some of her admirers.

"The latest example of embracing Republican Establishment corporatism is abysmal," said J.D. Rucker at the Liberty Daily. "What's worse is that she demonstrated her embrace of one of the most hated industries today among MAGA conservatives: Big Pharma."

"For a potential presidential candidate who had built up a good amount of conservative goodwill, South Dakota Governor Kristi Noem is projecting the wrong message to keep her name circulating in the hat," Rucker noted, adding she "picked the wrong time to unveil her Republican Establishment leanings."

"There's a fine line between defending individual rights and supporting the rights of private businesses to run their operations without government intervention. It isn't always black and white, but the Covid-19 'vaccine' issue is one that steers a good chunk of conservatives away from our standard hands-off approach to business. Forcing vaccine mandates onto employees is a form of discrimination. Even if we set aside the skepticism millions of Americans have when it comes to the so-called 'vaccines,' we cannot dismiss the draconian nature of vaccine mandates forcing people to choose between their careers and their healthcare freedoms."

The disconnect is found in the difference between what looks like a good 'talking point,' and the reality of workers having to deal with the issue of mandated vaccinations in the workplace. Just quit your job ... not so easy in practice.

The SD Governor seems to overlook that entire sectors of the economy are impacted by federal rules, not just individual companies. Hotel workers, restaurants, cooks and cleaners, mechanics, service industry writ large, are subject to forced business owner compliance with regulatory agencies. When the federal government initiates a mandate, all businesses within that sector are hit with the mandate. Switching jobs offers no security or escape from the mandate.

OSHA, the Dept. of Labor, the Dept. of Agriculture, and many other federal agencies create the system. All private sector businesses regulated by those agencies end up forced to adhere to those rules and regulations. Instead of targeting the solution on the employee, which to be fair does have some merit, leading political figures should be constructing their defense of workers by confronting the source of the underlying mandate; not the workers themselves.

Setting aside the reality that forced mandates for vaccination put the most vulnerable employee demographics in a position of agreeing to the jab or potentially losing the roof over their head; what MAGA voters understand better than the elites that fly above them – is their ability to think through consequences, because they have to actually live with them. MAGA people are smart, really smart, and they are pragmatic to the problems they face.

In some ways, pragmatism is on the opposite end of the continuum from ideological decision-making.

It is one thing to say, "defy the system" (ideologically), it is another thing entirely to actually carry through the process of defiance; when your ability to keep your family safe is contingent upon comfortable invisibility inside the same system.

Governor Noem approaches the issues faced from a top-down perspective. Someone like Donald J. Trump has shown he understands the issues we face from a bottom up perspective; and that is entirely why the blue-collar working class has connected to him.